Theil T. Theil conceived the vision of Undying Hope in 1986, during Sudan civil war. Theil was 11 years old when a military convoy was dispatched to his hometown.

When the convoy arrived, a landmine exploded one of the military vehicles, provoking outrage from the commander. He was furious and determined to seek revenge.

Consequently, the commander ordered his troops to burn down civilian houses, shoot to kill, and plunder whatever they lay their hands on.

The sky turned red from the smoke. The sun disappeared. Many people maneuver crossfires while running as fast as their feet can allow. Most neighbors were crying for the loss of their loved ones. Scores of families became homeless, and countless youths escaped Aweil that night. It was one of the most heinous and atrocious attacks against innocent civilians and Theil witnessed it firsthand at such an early age.

Theil's father was the Acting Commissioner, but he was ostensibly helpless and overpowered. Feeling of sorrow, helplessness, and anger was written all over his face. Worse still, schools in Aweil closed permanently after this tragic day. The commander turned several schools into military bivouacs.

UHI is a vision of love, hope, peace, and resilience.

It was formed to promote quality education in South Sudan, and beyond.  Schools in this region are few and illiteracy rates are among the highest in South Sudan.  Additionally, many children over fifteen do not continue their schooling because of economic hardships.  Theil Theil, founder of UHI and native South Sudanese, understands that it does not have to be this way.  Although his country has faced decades of war and many generations of extreme poverty, Theil knows that efforts must be made, that help is what is needed, and that nothing is impossible.  It is time to hope for a better future and time to put that hope into action.  This action has been made manifest in UHI.

UHI’s mission is to educational to impact the people of South Sudan, and beyond, in four spheres of activity: basic education, public health, and healthcare services, leadership development, and spiritual formation in the way of Jesus. The initial stage is to offer a high school education in the city of Wau (Guiding Star Leadership Academy) and the Seeds of Hope Elementary School (SHES) in Theil’s hometown, Aweil. SHES will provide education opportunities to orphans, among others. UHI plans to implement the same South Sudanese curriculum as other high schools where the students will be educated in math, science, the liberal arts, and other core disciplines.  But UHI’s vision compels them to teach and train in leadership, health, financial literacy, and spiritual formation. The hope is to invest in the current leaders and raise up future leaders who excel in good character and wise vision.

Nine directors make up UHI’s fiduciary board: Theil Theil, Dr. Charles Balch, Curtis Lee, Paula Reiger, Leigh Marcus, Brian Hopper, Jack Wisdom, Dr. Tulsi Maharjan, and Don Wiley. Theil hand-picked some of the board members for their areas of expertise and others through trusted friends. Theil’s strength is his heart for South Sudan and proven track record, his vast education in leadership and languages, exhibits strong work ethic and work experience, his patience and desire to build with excellence, and his ability to connect with other leaders in South Sudan and beyond.

This core group of directors, along with Advisory Board members and several other key supporters, are dedicated to laying the groundwork to provide tools and resources to current leaders and raise up the future leaders of South Sudan.

Education is the heartbeat of Undying Hope International (UHI). Based on Theil’s background as a native South Sudanese; his firsthand experience during three years of boarding school; and four years leading an American based nonprofit organization in East Africa in various capacities, Theil believes that intentional and quality education is a solution to the problems currently facing war-torn South Sudan. This strategic plan will shed light on the role that UHI will play in the nation’s building.

To achieve success and make an impact, UHI first plans to establish a School of Leadership Academy, at the elementary and high school levels, coupled with a coordination office. Here is why building Leadership Academy is critical. According to the United Nations Educational, Scientific and Cultural Organization (UNESCO):

Over 70% of South Sudan’s population (ages 15-years and older) are out of school due to:

72% of South Sudan’s population are young adults under the age of 30.

This staggering statistic put’s South Sudan at high risk and among countries with the highest illiteracy rates in the world. Without education, the future of South Sudan seems bleak. In October 2018, Theil took a trip to South Sudan, to meet with UHI target groups including youth, educators, government officials, individuals involved in the business community, and church leaders. Based on the research conducted and individuals interviewed, Theil’s findings suggest that many of the significant challenges currently facing South Sudan revolve around poor education.

Additionally, a boarding school has the potential of solving deeply rooted tribalism in South Sudan. After graduating from the Sudan intermediate school (Middle school in the US), Theil enrolled at the Managil High School (مدرسة المناقل الثانوية) in Managil, a city in Jazeera State, 150 miles south of Khartoum. Khartoum is the capital city of Sudan, where Theil’s family resides. Enrollment in this boarding school separated Theil from his family, but it was one of the best experiences Theil ever had. While at Managil boarding school, Theil lived, shared meals, and studied with different tribes from South Sudan. Throughout his three years in the boarding school,

Theil developed strong and lasting relationships which he still cherishes and appreciates to this day. The most significant advantage of his time at the Managil boarding school was this:

out of the many tribes and backgrounds;
there was only one tribe called South Sudan.

Without a doubt, this life-transforming opportunity and experience have tremendously shaped Theil’s future. Theil’s utmost hope is that the UHI boarding school would bring different tribes together to live and study in harmony, love, peace, and unity just as the Managil boarding school had. Theil is passionate about boarding school and the benefits they bring, and optimistic that an intentionally designed educational atmosphere would positively contribute to local and nationwide communities over time, and make a difference in the building of this young nation.

The administrative office will be vital in coordinating other UHI programs, projects, and activities. Besides the School of Leadership Academy, Theil foresees UHI actively training, coaching, and mentoring government and spiritual leaders as well as entrepreneurs. While the Leadership Academy for high school students is the focus of UHI, it will be advantageous for UHI to also develop training materials designed specifically for the government officials, business community, and spiritual leaders. Theil’s Master’s degree in Organizational Leadership, coupled with the strong relationship he has established with individuals in key positions of authority, and the skills acquired in the U.S. and South Sudan will be a great asset in sustaining these vital programs.

Four styles of leadership have been identified as UHI’s focus area include servant-based leadership, transformational leadership, financial leadership, and organizational leadership. To effectively implement these leadership development programs, UHI will need to have an administrative office in Juba to coordinate with domestic programs as well as follow up with the international logistics and procedures based out of the UHI office in the United States.

This Undying Hope, my ocean of desire for South Sudan, developed in my heart by way of three rivers: my culture, my circumstances, and my spiritual growth. I was raised during Sudan’s civil war and lived through insurmountable odds. However, I have never lost hope. Therefore, I thought it fit to include with this strategic plan the reasons why Undying Hope matters and what it means to me personally.

(1) My Culture
In my dialect, Dinka, Theil means "sleeping on an empty stomach." Literally, my name means going to bed hungry. In South Sudan, it's not uncommon for kids to go to bed hungry. Like many South Sudanese, I have slept hungry countless times. The good news is that, in such desperate situations, there is always hope that there will be something to eat tomorrow. An undying hope. It's my utmost hope that, UHI would play a role in eradicating hunger through education in South Sudan and beyond so that no one will “Theil” again.

(2) My Circumstances
South Sudan lacks basic services and infrastructure. Due to many decades of civil war, the people of South Sudan are grappling with economic hardship, the absence of good schools, poor health care facilities, and a lack of paved roads. In retrospect, when I was a child during the civil war, my classroom was under a tree, students sat on the stones and used only one or two UNICEF notebooks for all subjects. Such a dire situation ignited a passion in me, to be part of building a better South Sudan, where everyone has an opportunity to go to school, dream big, and achieve his or her full potential. Herein lies my desire to play a role in enhancing the educational system in my native land.

My hope for a better future has never died. Since I was a little boy, growing up amidst Sudan’s civil war, I always believed that good days lie ahead for South Sudan- that grace awaited us. It is certainly an undying hope. For such hope to come to fruition, generational seeds need to be planted through quality education and watered with leadership development. The hope is that these seeds will germinate and produce good fruit down the road. It's an undying hope for a better and transformed South Sudan, and beyond.

(3) My Spiritual Growth
As a follower of Jesus Christ, my utmost hope is eternal life. Hope does not die so long as we are alive. I pray consistently that, when I depart this planet earth, I will hear God say to me, “well done, good and faithful servant.” It is noteworthy that ever since I started the Residency training program through my home church, Bay Area Community Church (BACC), I have grown spiritually, interpersonally, and professionally. BACC-Residency has shed light on my spiritual life through constant examination of the scriptures, daily meditation on God's Word, and practical application of God's instructions and commandments. I am profoundly grateful and thankful for such unique training on character, knowledge, and skill.

Community members in Aweil and Wau generously donated construction and farming lands to Undying Hope as their active way of supporting Undying Hope’s vision and mission. We need your support as we build the future of South Sudan. 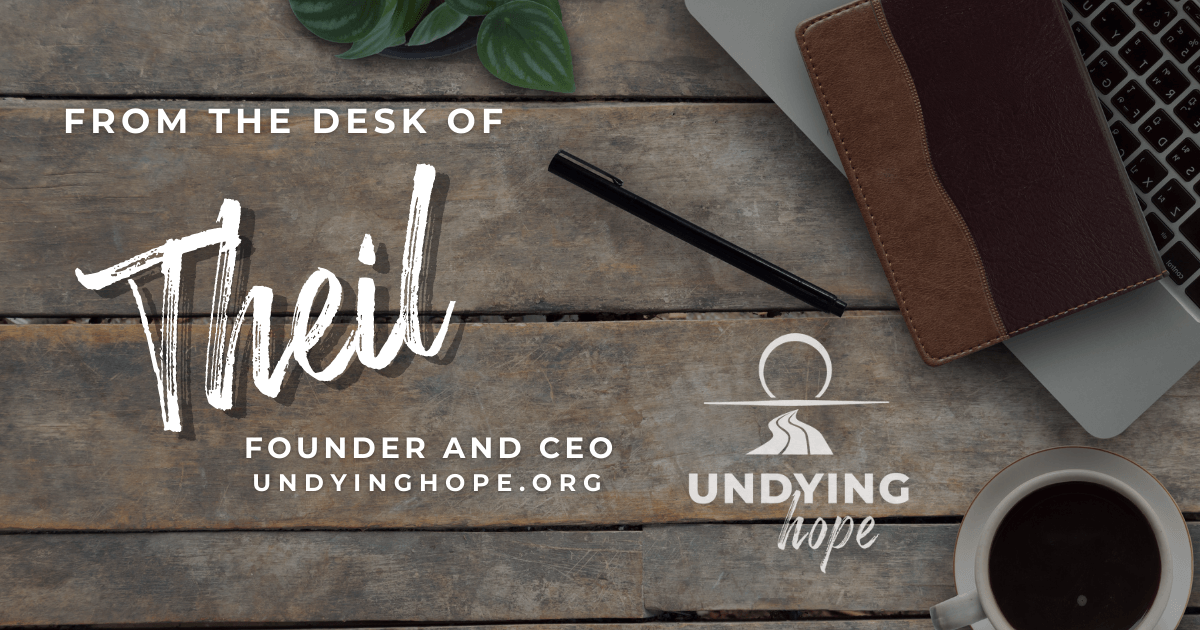 Poverty-stricken populations lack basic necessities and experience unbearably painful and cloudy life. Feelings of helplessness and hopelessness intensify when we face challenges and difficulties beyond our control and ability. In the valleys of life, vulnerable people hope and pray for compassionate hearts to rescue them. The utmost desire at this low stage is a desperate…
Read More

United around Books and Beans

Tribalism is eroding the social fabric of South Sudan. Admittedly, tribalism is one of many problems South Sudan is grappling with, hindering development and prosperity. On my Facebook heading, I wrote, “Out of many tribes, one people, one nation, one South Sudan.” This phrase stemmed from my profound belief through experience that great things happen…
Read More

3 Reasons Why “Undying Hope” Is A Name Of Choice

At this juncture along the spectrum of my Undying Hope journey, I thought it fitting and timely to share what Undying Hope means to me personally, a vision that I have been pregnant with for over three decades. Undying Hope is a journey with several milestones along the way. Thankfully, God continues to bring people…
Read More

Listen to Theil Theil share his incredible story of overcoming the challenges of growing up in a civil war as well as the vision for Undying Hope. He can bring this inspirational message to schools, organizations, churches, groups, etc.